As key features of a Mediterranean home, these houses are enough to make you think of paradise. And rightfully so: This style has been around for centuries, although it’s been fine-tuned to match today’s modern family requirements.

The Mediterranean home (categorized under Spanish Colonial and Southwest) ranks as a popular favorite across the southwest, but this style can be found almost anywhere in the United States. What Are Mediterranean House Plans?

Mediterranean house plans draw inspiration from many resources, like Moorish, Italian, and Spanish architecture. They are most common in warm climates throughout the southern states of Florida, Texas, Southern California, and Morocco, Italy, Greece, and other subtropical areas. 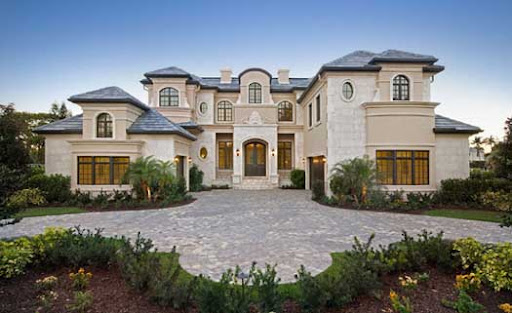 “It’s timeless and quintessential California,” says Jute Home’s Alison Davin of the Mediterranean style. “If you want a house that is not trending and won’t require updating—one with really warm woods, bright walls, and indoor-outdoor living—it’s never really going to go out of style.”

Mediterranean house plans were popularized in the United States in the 1920s by Santa Barbara architect George Washington Smith. He used the then-current Spanish Colonial Revival style and added his twist, ultimately creating the Mediterranean house many of us know and love today.

The Mediterranean house plan style has evolved dramatically over the years and initially took from the Churrigueresque style. This style refers to the Spanish baroque style of elaborate architectural ornament with stucco decoration in Spain in the late 17th century.

“Some of the earliest Mediterranean is Churrigueresque,”says Merry Ovnick, associate professor of history at California State University, Northridge. “In the 1920s, people didn’t want to talk about copying Mexican things, so they called it Spanish revival. Houses with classical columns around the driveway picked up from northern Italy. The greater formality came from Italy or North Africa.”

Spanish Colonial Revival homes were most popular in the United States between 1915 and 1940.

And like the Mediterranean style, Spanish Colonial Revival has red, tiled roofing, stucco walls, and expansive outdoor spaces. The homes are commonly in L-shapes with a courtyard sitting in the open space in the backyard.

Italian Villas are more extravagant than the typical Mediterranean home. Villas belonged to upper-class country homeowners back in ancient Rome, and more wealthy families continued to own these vast houses over the centuries These are asymmetrical, Italian style homes complete with unique towers. It was a distinct style in the 19th century and is most commonly found as urban row houses in major cities like San Francisco or New York.

Mediterranean homes pulled from Moroccan style because of their stucco, large windows, elaborate archways and ironwork, and colorful tiles. 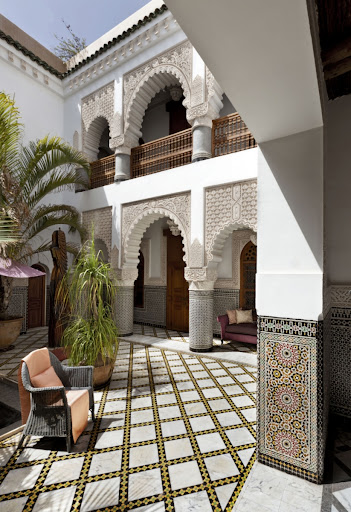 However, today’s Moroccan styles typically focus on the inside rather than the outside: With centrally-placed gardens or courtyards, windows and doors face inward to protect residents from outside weather.

There are many more styles that the Mediterranean has evolved from over the centuries—but no matter which specific kind you’re looking at, there are core features found on the interior and exterior of these Mediterranean home plans.

Interior features may vary based on your design, but there are quite a few elements built into the home. Mediterranean floor plans have an open layout which allows breezes to come inside when the windows are opened. Living rooms and kitchens are typically open to one another with a bar area and perhaps a separate media room. 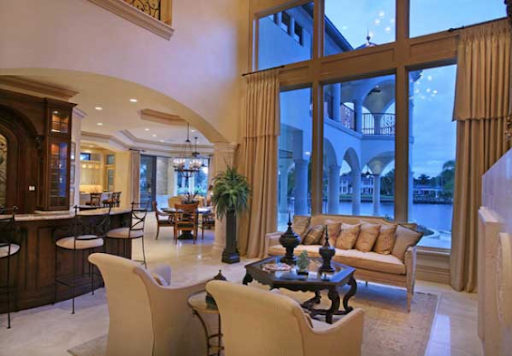 Nowadays, in terms of interior design, many homeowners opt for an eclectic style, which mixes old styles with modern tastes.

The most noticeable thing about Mediterranean homes is their exterior architecture. Almost all of these homes have stucco or plaster exteriors with red tile roofs and shady overhangs. You’ll also find other significant exterior features, such as:

Mediterranean homes were inspired by Spanish-style homes built in regions with hot temperatures. Today, Mediterranean floor plans continue to bring the outside and inside together and remain prominent in warm climates.

However, that’s not to say that you can’t find Mediterranean homes in colder climates. Some of these exterior features, like open archways into the courtyard, might be changed to French doors so that light can still come in during the winter months. Courtyards might also be converted into large backyards with separate poolhouses.

Are Mediterranean House Plans Right For You?

Mediterranean homes are vast, gorgeous homes that often remind people of a vacation house. However, it’s also an ideal home for those who live in the hot southern climates and like to combine their indoor and outdoor living.

“These homes have always been popular, especially in lake communities and the suburbs of metropolitan areas,” says Owen Boller, a real estate agent. “There are quite a few available for sale.”

But how do you know if the Mediterranean house plans are right for you? Think of it this way: If you already love the exterior design, all you need is to want to bring the outside in. These homes are designed to flow from outdoor courtyards and backyards inside with ease. Plus, these homes are generally designed to fit large families, which means there’s plenty of room to grow a family

So if you and the family love open-style, elaborate house plans, Mediterranean home plans might be for you!

Mediterranean homes are gorgeous, extravagant houses perfect for those living in warm climates and love the weather.

These homes may range anywhere from under 1,000 sq ft to well over 3,000 sq ft—but at Monster House Plans, each one is customizable to keep core features, like large windows, outdoor living spaces, open floor plans, and unique ironwork or tilework.