When looking for house plans, make sure you keep your pets in mind!

Because, if your family includes those of the four-legged variety, then a well-planned out dog yard is a must-have for the long summer days. Many of our furry friends will opt to be outside when it’s hot and humid. And as every dog owner knows, a bored dog is a troublemaker. When planning out your dog yard, check out these features for a contented canine!

A water fountain in your dog yard keeps your dogs well hydrated in hot summer months.

A physical necessity for dogs who spend the days or nights outside during the hot months, so why not make it a deliberate feature? Ranging from simple to complex, a drinking fountain for your pooch adds ambient sound to your dog yard while keeping your beloved pets hydrated. 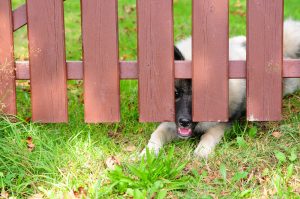 A good fence around your dog yard will keep everyone safe.

All dogs love to run and are driven by their noses. Proper fencing is a must to keep your dogs safe from environmental hazards such as vehicles, other dogs, and toxins in the area. It’s not enough to create a cool play space for them; good boundaries in a dog yard make them feel safe and allow their playful natures to come through.

Everyone needs to be able to get away from the direct heat of the sun. Either with landscaping or with structures, provide plenty of cool spaces in your dog yard to rest and cool off in the high heat of the day. 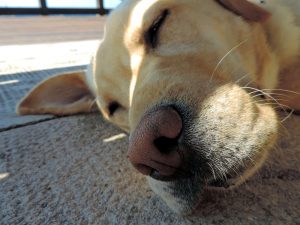 Provide shade in your dog yard for your pooch can rest from the heat of the sun.

Make sure that your landscaping choices in the dog’s play area are safe to be around. Check out the ASPCA’s list of harmful and toxic plants here to make sure there aren’t any plants that could be dangerous to a curious pup. Also remember that pesticides and herbicides are toxic to animals. Consider using natural or organic pest control methods in areas where your dog will be spending a lot of his time. 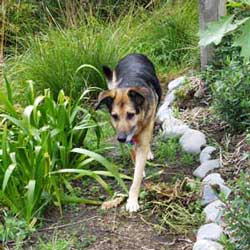 Build paths into your dog yard for your pup to scout and sniff around in.

Dogs love to scout and sniff out their landscape. By creating paths through your dog yard you provide lots of prowling ground for them to investigate. Keeping their nose and mind active is one of the best ways to engage their curiosity– and it will tire out your dog for a well-behaved evening.

Creating a play space for your dog needn’t take up valuable real estate in your back yard. Many of the features that will keep your pups happy and healthy have benefits for their humans as well. With a little creative planning, your backyard dog yard can be the ultimate hang out spot for the entire family.

There is something innately American about a July 4th backyard gathering. Whether hosted at one home, or shared between neighbors for a block party atmosphere, the outside party to celebrate our country’s independence is a widespread tradition for many families. As we get closer to this year’s celebratory weekend, here are a few must-have’s to make your gathering the best yet.

Traditional décor like bunting, pinwheels, barn stars, and red, white, and blue lights make for a classical welcoming porch that invites neighbors and friends into your July 4th party space. Hanging metal lanterns are very popular this year. Allow the front door to be the focal point, especially if you’ve already chosen a bold color for this feature, and build your decorations out from there. Adding additional splashes of color with potted arrangements on either side of the door or on the far sides of wide front steps brings a celebratory atmosphere all the way to the street and expands the gathering space into the yard. 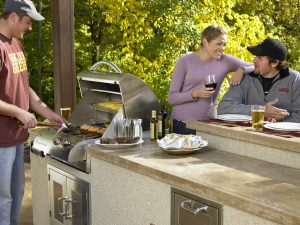 The best outdoor parties provide multiple spaces for people to gather and move about with ease, and there is no better way to facilitate the natural flow of party goers than having a grilling porch. This is one of the most commonly sought after features of house plans today. Often covered, a grilling porch provides a safe space for a BBQ and a contingency plan in case of rain on your July 4th party day. A designated space for cooking and eating makes hosting an effortless endeavor, and with built in prep space you’ll spend less time running in and out of the house and more time enjoying the time your guests. 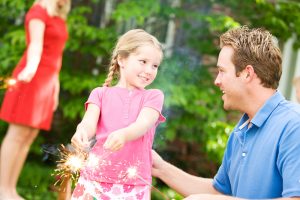 Before the July 4th afternoon gets into full swing, make sure you have planned for the safety of your family and guests before anything might occur. If you live in an area where fireworks are permitted, check with your local fire department for recommended safety protocols. Teach small children at your party about firework safety and let your guests know where to find fire extinguishers or garden hoses. Also remember that explosive sounds can frighten animals into running away, so make sure to keep a close eye on your four legged family members and put them in a quiet spot in the house if they are a flight risk during fireworks shows.

No matter what size lot you plan on building on, considering a courtyard house plan is one of the most traditional ways to elevate the elegance and maximize available space.

Most of the house plans that offer a courtyard already in the design are of the traditional variety: European designs in particular favor this feature. But several of the more recent American trends have also adopted the courtyard garden as a way to provide private outdoor space that is both open to the air and protected from the stronger elements.

Enclosed within the main structure of the house, a courtyard garden often exists in the center of the lot, with the main arms of the house surrounding it. But there are options: a courtyard can also be situated towards the back and side of the house, or can be built between the main house and a detached garage and used as a vestibule space. There are countless options for bringing this lovely space to fruition, and several reasons why it’s a good idea to consider for your own dream house plan.

Courtyard house plans typically have a few features in common:

The garden space inherent in a courtyard house plan can elevate your dream home to a new level of simple elegance and make efficient use of space on your chosen lot. Search our large selection of House-Plans-With-Courtyards.

Your Guide to Outside Spaces

When imagining your new home and the surrounding outside spaces there are a few options to consider, each with their own special offerings. Here are a few of the most popular outside structures and some things to consider with each:

Patio: A patio is defined as a paved outdoor area that is adjoining a house or structure, usually without a protective roof overhead. This is quite simply a concrete or brick area usually at the back of the house between the house structure and the yard beyond.

Veranda: A veranda, in contract, is a roofed platform along the outside of a house and level with the ground flood. The platform can be made of wood or, like the patio mentioned above, can be concrete or brick.

Porch: A porch is a covered structure projecting out from the front of a house or structure, almost always with a door into the main house. The building materials often vary widely, as do the stylistic considerations with elements like railings, stairs leading to the yard, and overall look of the structure.

Porto-cochere: This features comes from the French Country House style, as seen in this week’s Plan of the Week. A covered area between the main house at the front and a gate house-type structure, it historically provided a shelter from the weather to visitors disembarking from vehicles. Still used often in commercial hotels, porto-cocheres are usually made with natural materials such as stone or mason work and are a beautiful blend of function and a rustic elegance style.

Gazebo: A gazebo is a separate structure on the property but not attached to the main house. A stand-alone roofed area often with a low railing all around, gazebos are almost always built in a circular pattern and offer 360 degree views of the surrounding landscape.

Pergola: A pergola is a stylized structure most often seen surrounding a garden space. It is tall and with an open area above, often used as a support for perennial vining and trailing plants such as wisteria.

Some of these structures can be added once the house is built, but some of the others require working with your designer at the house plan stage of this project. It is important to have an idea of how you envision spending time outdoors at an early stage of your dream home project, as many of these options are included in the house plan and designer you choose to work with.