We offer a wide variety of house plans to choose from; the Craftsman house plans, in particular, are still capturing the American imagination. The progeny of two distinct parents, the craftsman can be seen as the quintessentially adaptable American child.

Paternal influence comes from Englishman William Morris’ rebellion against the Industrial Revolution. He perceived a profound discounting of the individual worker and a subsequent dehumanization of labor. In response, artisans gained prominence as a way to showcase the quality of individual craftsmanship. The mother of this style is the every-woman of the day, caught in the shifting tides of changing social structures and familial obligations. The woman of the house no longer typically had live-in servants and was mostly responsible for the housework along with the raising of the children.  Out of this grew the need for a functional aesthetic, simple yet beautiful; a home for the modern family.

Through this lens, we can trace the genealogy of the American family structure. And while the Arts and Crafts Movement increased in popularity, the Craftsman home gained prominence as the architectural embodiment of these shifting social elements. 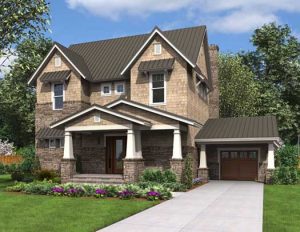 The typical craftsman home can easily be identified by a few consistent features. Externally, we see steep hipped roofs and visible gables which are often used to protect front porches under deep eaves. Exposed rafters or supporting brackets on the exterior showcase the workmanship that is so important to this style, while also adding an aesthetic flair. Double-hung windows are also common features, historically boasting a four-over-one or six-over-one design for decorative enhancement. But perhaps the most easily recognizable exterior element is the visible mixed materials both local and natural to the area. Stone, handcrafted wood works, and glass are major players in this style of home, paying homage to the handcrafted workmanship out of which this style originally gained footing in the American imagination.

Interiors also reflected changes to the American family unit. Perhaps the most significant element to this design is the kitchen. As housekeeping needs changed, the modern family needed a way to interact in those spaces traditionally reserved for servants.  In response, the kitchen was integrated into the main floor plan and provided open sight lines to other common areas of the home, including the back yard. As an amendment to the open kitchen, the breakfast nook was introduced as a place for the family to gather around meal times. Space that would historically have been used as a butler’s pantry were replaced with built-in cabinetry more functional for the modern family. This was also a space in which to showcase handcrafted wood and glass work so indicative of the Arts and Crafts style.

Craftsman homes declined in popularity in the 1920’s or so, but came to the forefront again some 60 years later when many large cities in the United States experienced housing booms. In particular, California and Washington State saw large increases in population and growing local economies; the demand for homes for single family units was high. Even now, sales for Craftsman floor plans are up from previous years.

Partly because of the simplicity and functionality inherent to the design of a Craftsman house plan, we are seeing another push for these classic designs for modern families. Perhaps it is a quieter cousin to the rebellion from which we first gained footing, but in this world of mass-produced everything and internet commerce, a return to the importance of hand-crafted features is growing in prominence.  Moving away from some of the earlier interior elements like low ceilings, this archetypal design offers much room for adjustment. This is a plan inherently designed for adaptation. The foundational clean lines and connected spaces are a short step away from becoming the open floor plans so high in demand right now. With the addition of higher ceilings and larger windows, the cozy feeling of the traditional design easily transforms into the bright, open, adaptable space of the Contemporary Craftsman. 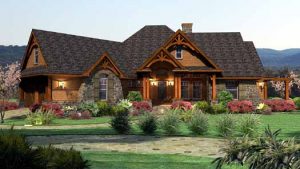 A contemporary Craftsman house plan for the modern family.

In either the classic or the contemporary incarnation, this design has been integral to the American concept of home for over 100 years. And, in true American fashion, its easily adaptable structure allows plenty of room for reinvention and creativity, and continues to showcase all that is best about individual workmanship.